If I Ruled NYC 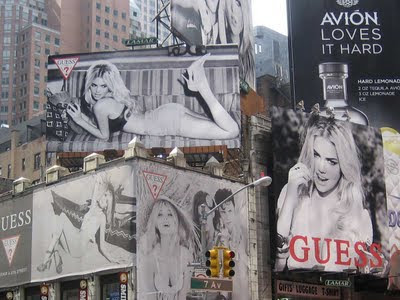 The signs suggest NYC "loves it hard," and I'd be happy to oblige.  If I ruled New York City:

Cellphones would explode at the "event horizon" of my presence, forming a ring of fire 80 feet across.

If only!  Unfortunately I have not developed super powers to match my super desires, so I have to be more realistic: 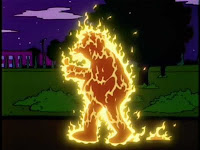 Bankers would spontaneously combust and make an unearthly shrieking sound, like a burning witch, as they melt into puddles along the sidewalk.

Again, sadly, I'm hoping too high on the hog, because the childhood warning "liar liar pants on fire" has turned out to be nothing but empty words, words that only affect people with a conscience -- a laughable weapon in these times, like a gun that shoots best wishes.  So I have to be even more realistic:

Drivers would be required to have microscopic horns implanted in their ears before they could use their horn or car alarm, so that using them would unleash a skull cracking, eye exploding assault that would cripple the driver and leave them with a never-ending ringing in their ears, as if they were wearing a Gothic church bell hat, even as deafness set in and their sanity drooled out their ears.

Hmm... Still too hopeful.  Drivers are sitting in their escape vehicle, so it would be hard to round them up for the implants without assaulting their vehicle, which would probably destroy it and leave massive piles of wreckage all over the city, causing even more honking and alarm.  I guess I'm just going to have to settle for something pathetically mediocre and hardly worth doing:

Flatbed trucks with catapults would patrol the streets 24/7, flinging cinder blocks at luxury developments until they're all reduced to rubble.  Then crews would pour compost over the rubble and plant flowers.  The flowers would attract bees, their honey would attract bears, and the bears would kill any new developers who threaten their idyllic hill of rubble, flowers and bees.

And if, God forbid, even that turns out to be asking too much, maybe I'll just order the Sanitation Department to stop trucking garbage out to fill every hoot 'n holler in the country, and start flinging it over the fence of hole-in-the-ground developments, like the one in Williamsburg below. 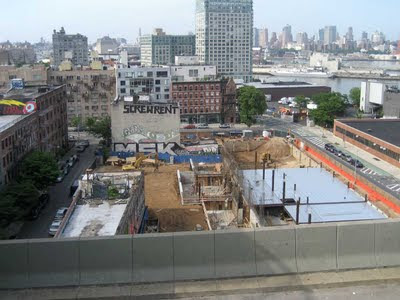