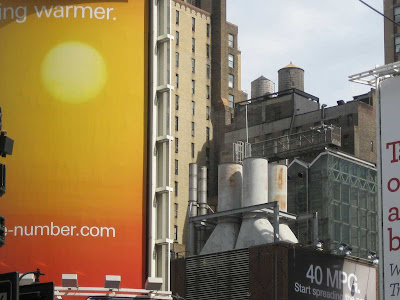 It's getting warmer at Penn Station
I sit down outside the 7th Ave. end of Penn Station, and start drinking my coffee.  A street person surrounded by bags is chattering away, chipper as hell, as if his brain was just sprayed with happy juice.  He asks if I want to join him at Heavenly Burgers, his treat!  He launches into a glowing description of Heavenly Burgers, like a radio ad.  I smile but ignore him.

Then a kid in a red t-shirt walks up, with a plastic-sleeved Metrocard hanging "ID style" from his neck, always a bad sign.  He says his name is Jason and he's come with a group from Texas to pray for New Yorkers (15 more red shirts are working the area).

I ask "Don't you have enough sinners in Texas?"  He says "Yeah, but don't you need a prayer -- for money, a job, for something -- or is life really so great you can't use one?"

I say "No thanks" again, then point at Mr. Heavenly Burgers and say "How 'bout him?"

I try to not eavesdrop as the two go back and forth for the next ten minutes, but I learn that Mr. Heavenly's real name is Bam-Bam and that he's not married to the idea of Heavenly Burgers, as he tries every debate trick he can think of to get Jason to transform the water of prayer to wine, or at least food or cash.  The exchange seems to end in a draw, with both of them moving on to more promising pasture.

"How 'bout him?"... I love it when my brain does exactly what it should, even before the coffee crop-duster has sprayed its dead gray rows of cotton with happy juice! 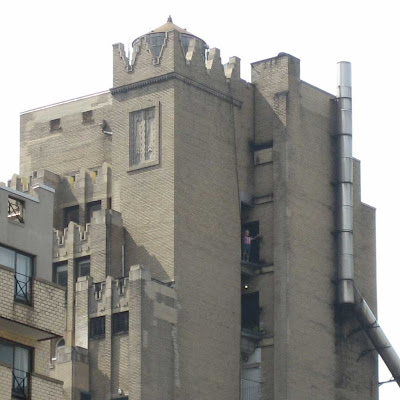 Meanwhile, a block away on 8th Ave., an old man in a red
striped shirt airs himself out under the water tank crown
MORE POSTS ON: Religion, Street People, Water Tanks
Newer Post Older Post Home